No matter how many times you’ve visited Maui, you really haven’t experienced the island until you’ve seen it by air.

The majority of Maui is exceptionally remote — humans might not have even set foot on some of the most isolated ridgelines. It’s an island where roads mostly circle the coast. Even if you’ve been to Haleakalā Crater and driven each upcountry road, there are still enormous swaths of land you’ll never see from the ground.

Consider the fact that the Road to Hāna is lined with waterfalls. Each of those waterfalls is tucked in a valley about 50-100 yards wide, which is all you see while passing by on four wheels. Those valleys actually climb and twist up numerous slopes, housing dozens of thundering falls miles away from the road.
Read more

The island’s tallest waterfall, for example, can only be seen from the air. Hidden deep in a West Maui valley, Honokōhau Falls drops some 1,100, feet in two vertical tiers. You can see the falls on a helicopter tour that combines West Maui with Moloka‘i. After crossing the Pailolo Channel that separates the two islands, you’ll also zoom past ancient Hālawa Valley — one of the oldest settlements in Hawai‘i — and explore the famous Moloka‘i sea cliffs that drop nearly 4,000 feet. In winter, you can even spot Hawaiian humpback whales as you cross between the two islands, their 50-foot shadows in battleship formation as they slowly drift by.

Aside from the West Maui/Moloka‘i route, the other popular air tour on Maui is a loop over Haleakalā and Hāna. Watch as the fields of Central Maui give way to pastures and ranchland, and see the jet-black lava rock from Maui’s last eruption. You’ll also cruise by Haleakalā Crater to glimpse its multihued cinder cones before exploring the East Maui rainforest with its hidden valleys and falls.

Aside from determining what part of the island you want to see, another thing to consider is what sort of extras these air tours include. Some companies, like Air Maui, offer private landings at cliff top viewpoints and pastures along the ocean. Other companies, like Pacific Helicopter Tours, offer visitors the chance to take off the doors and get even closer to the action.

For an air tour on Maui unlike anything else that’s offered, take a powered hang gliding lesson from the small airstrip in Hāna. Along with a professional pilot and instructor, you’ll not only learn the basics of how to steer a powered hang glider, but you’ll also see the Hāna coastline and experience its valleys in a uniquely thrilling way. 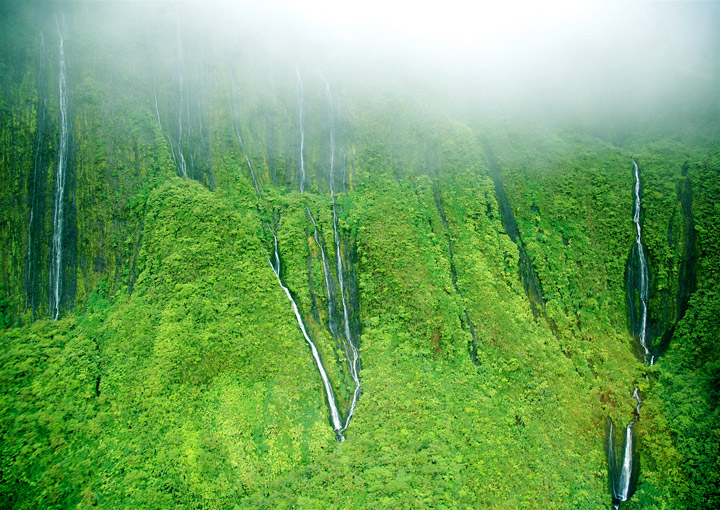 Whale watch with the experts on Maui's top-rated ecotour and see these amazing creatures in their natural wild habitat. Adult $44, Child $25

Zipline through Mauis Tropical Plantation in Waikapu and end near Ma‘alaea Harbor.