You're currently on: Home Big IslandBeaches 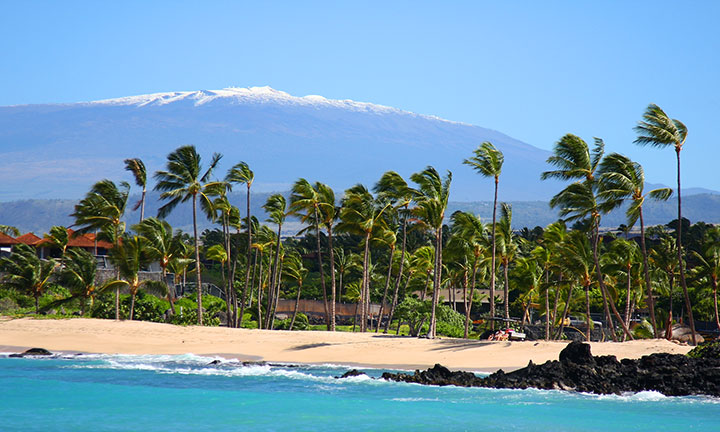 Under the pressure of Kilauea’s relentless lava flow, this giant baby of an island continues to adapt and take shape. Noticeable in that pattern of ebb and flow is the metamorphosis of the beaches that fringe its 266-mile coastline. The coastal areas are laced with new and old lava flows that slice through, or completely cover, old beaches and at the same time create new ones. The result is a multi-hued shoreline where some great beaches can be found.

Most of the Big Island’s popular white sand beaches are found on the Kona/Kohala Coast. Black and green sand beaches are found primarily on the southern coast. Both Hilo and Kona offer excellent snorkeling beaches with gradually sloping ocean floors. As a rule of thumb, the west coast has calmer waters as it is protected from the winds by the mid-island mountains.

On the Kohala Coast, Kauna’oa Beach at the Mauna Kea Beach Hotel, has been rated one of America’s top beaches. Top national ratings have also gone to Hapuna Beach, just south of Kanua’oa. This is a popular “walking” beach and an excellent place for body boarding. Anaeho’omalu Beach, or “A-Bay,” is a good spot for windsurfing and sail boarding. Ka’upulehu Beach at the Four Seasons Resort is a relatively undiscovered white sand beach known for excellent water quality. Spencer’s Beach Park in Kawaihae has all the public amenities, including camping. Further north, Manukona Beach Park offers some of the best snorkeling on the island.

Near the Keauhou Resort, you’ll find White Sands Beach Park, also known as Magic Sands because the beach can quickly disappear during high surf months only to return in the spring. Kahalu’u Beach Park, also near Keauhou, is Kona’s most popular snorkeling beach.

Punalu’u Beach Park, on Hwy. 11, is a well known black sand beach. Near Mackenzie State Park in Pahoa, you’ll find a lava-lined pool heated to 95 degrees by a volcanic stream. In Hilo, Coconut Island Park, near the Hilo Hawaiian Hotel, is a local favorite for fishing and swimming.

On the northern coast of the island, Laupahoehoe Point Park, created by a lava flow from Mauna Kea, has a large green grassy area and is a good place to camp. Waipio Valley’s Black Sand Beach, probably the island’s most scenic beach, is accessible only by foot from the overlook or four-wheel drive.

WATER SAFETY: Water conditions at any beach are subject to extreme change. Rip tides and undertows are common and dangerous, particularly because of the outcroppings of jagged lava rocks. Many beaches are unguarded so for your own safety, follow these basic rules Watch the ocean at least 20 minutes before entering. Telltale signs of hazardous conditions are water moving by rapidly, constant swirling in seemingly calm water and waves breaking far offshore.

Most Popular in Big Island Beaches 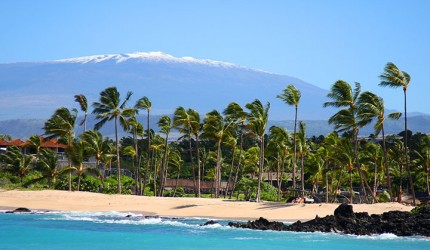