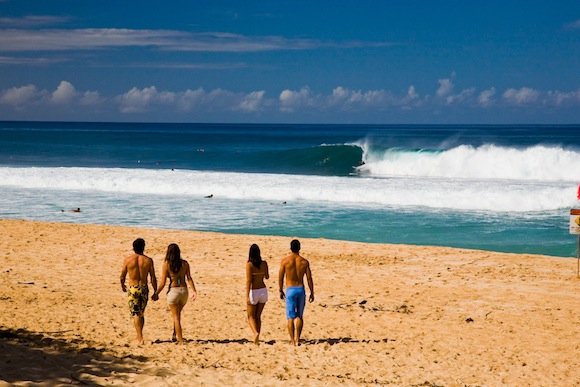 The North Shore is sublime. With a stunning mixture of power and beauty, action and tranquility, it’s the place to be, especially in the winter months when the big waves and a big wave of sightseers roll in with an almost equal intensity.

Not so long ago, the North Shore was still the quintessentially country place in Hawaii: laid back and largely unfamiliar beyond a certain circle of residents, surfers and wannabes.  In recent years, however, there’s nothing hidden about the North Shore. The Hawaii Visitors and Convention Bureau estimates that more than half of the state’s 7 million visitors make the trek to the North Shore at some time during their stay.  The restaurants, shops, waves and roads are crowded. Just ask any old-timer about traffic if you want to start a rant. And there’s talk about building new hotels in the area, which some say will change the pace of the place forever.  Still, the beaches are wide and relatively uncrowded, and many inland attractions (yes, there’s more to the North Shore than sand and surf) remain under the radar.

Whether at famous sites such as Sunset Beach and Banzai Pipeline or lesser-known breaks such as Backyards and Velzyland, seeing the winter surf and the daring people who ride it remains a powerful attraction.

Inland, there are historic places such as the Puʻuomahuka (the largest heiau in the state) or the James Campbell Wildlife Refuge to visit. And increasingly, there are great places to eat up and down the coast, whether you’re looking for a quick burger to munch on the run or a dinner with a view worth lingering over.

Holding periods for men’s and women’s surfing contests, including the famous Triple Crown of Surfing Championships, start in mid-November each year and continue through March.

Aliʻi Beach Park: Home to the OP Pro men’s and women’s surf contests, Ali’i has some of the best but most dangerous surfing waves on the North Shore, with a break on an extremely shallow reef that provides great viewing when the conditions are clean. Closer to shore, the area is considered safer, even for beginners.
Parking: Yes, 88 stalls in the park and more along Haleʻiwa Road.
Lifeguard: Yes.
Restrooms: Yes.
How it got its name: There’s no evidence that this beach was particularly associated with Hawaiian aliʻi or royalty. Best bet: Some workers at the old Haleʻiwa Hotel, where the Haleiʻwa Joe’s restaurant now sits, dubbed it “Aliʻi Beach.”

Haleʻiwa Beach Park: A nice, safe place to picnic, play, wade and watch the bigger waves across the channel at Ali’i Beach Park. The beach is long, safe and sandy. The name means “home of the frigate bird.”
Lifeguard: Yes
Parking: 97 stalls inside the park.
Restrooms: Yes.
How it got its name: Literally “house of the frigate bird,” although the iwa aren’t noted for being in this area.

A good place for beginners, where several surf schools sometimes take their classes. Usually smaller than elsewhere on the North Shore, the waves gently roll into the large southern end of Waialua Bay.
Lifeguard: No.
Parking: At Haleʻiwa Beach Park.
Restrooms: At Haleʻiwa Beach Park.
How it got its name: Literally, hot issue, perhaps because Pele was once said to live in the area before moving to Hawaii island.

Laniakea (or Turtle) Beach: A favorite stopping place for tourists, this beach isn’t particularly good for swimming because of its rocky bottom and strong currents, even on calmer days. But it does have a long, beautiful right-side break when there’s a big swell. It used to be less crowded than other spots, but these days there’s almost always a line of cars looking for roadside parking and dozens of people dashing across the adjacent highway, often to glimpse the turtles that lounge there.
Lifeguard: Mobile lifeguard stand
Parking: Only along the highway.
Restrooms: No.
How it got its name: One of the first residents in the area called his home Laniakea (wide sky) for a nearby spring and the name eventually got associated with the break.

Chun’s Reef: Named for a well-known resident who once owned a two-story house here, it’s among the popular surf spots on the North Shore, as the long line of cars and spectators can attest. Not particularly good for swimming because of a shallow reef that comes all the way to shore.
Lifeguard: Mobile lifeguard stand
Parking: Only along the highway.
Restrooms: No.
How it got its name: Formerly known as Kumakani (“to stand against the wind”), the surfing spot got its new name after a well known resident, John Chun, built a home here and his kids started going surfing. 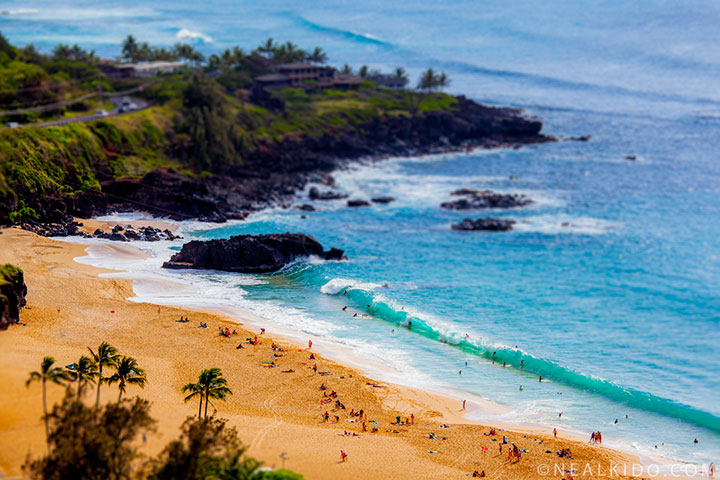 The biggest, most historic, most famous of all the North Shore breaks, Waimea sometimes has rideable waves when all the other spots are closed out. Waves can reach 25 to 30 feet offshore and even the shorebreak can be a powerful, awe-inspiring site. Stay well clear of the water and enjoy the spectacle. When the big waves are here, though, so are the crowds. Be prepared to walk a mile or more from your parking space to a prime viewing site.
Lifeguard: Yes
Parking: 44 stalls inside the park. More up and down the makai side of Kamehameha Highway on either side of the bay.
Restrooms: Yes.
How it got its name: The red soil that washes into the water from the valley above gives the way its name, literally “reddish water.”

Pupukea Beach Park: Narrow and long, Pupukea is a popular place to stop on an around the island watch the big waves crash on the rocks. With few rideable waves, the site is known for it’s sublime sounds and sights. With a Foodland and Starbucks right across the street, it’s a good place to stock up on picnic supplies and safely dine in a place where you can feel the ocean’s spray on your face. In calmer weather, there are three swimming sites: Three tables, Kapoʻo and Shark’s Cove.
Lifeguard: No
Parking: 26 stalls and more along the highway.
Restrooms: Yes.
How it got its name: At certain times of the year, small white mollusks with hard shelves wash into shore. Hence the name: white shell.

When the conditions are right, this two-mile stretch of beach (the longest continuous stretch of wide beach on Oahu) features some of best surf-watching opportunities in the world: long, clean barrels so close to shore that you can feel the ground shake when the waves break on the shallow reef. The park, located across from Sunset Beach Elementary School, on the southern end of this beach stretch offers the only off-road parking and rest rooms in this area. To find the best viewing site at Pipeline, look for the public access lane about 100 yards north of the park.
Lifeguards: Yes
Parking: Yes, but limited
Restrooms: Yes.
How it got its name: Pipeline refers to the clean barreling waves. Banzai is the Japanese exhortation and war cry, said to be first used at the site by filmmaker Bruce Brown. 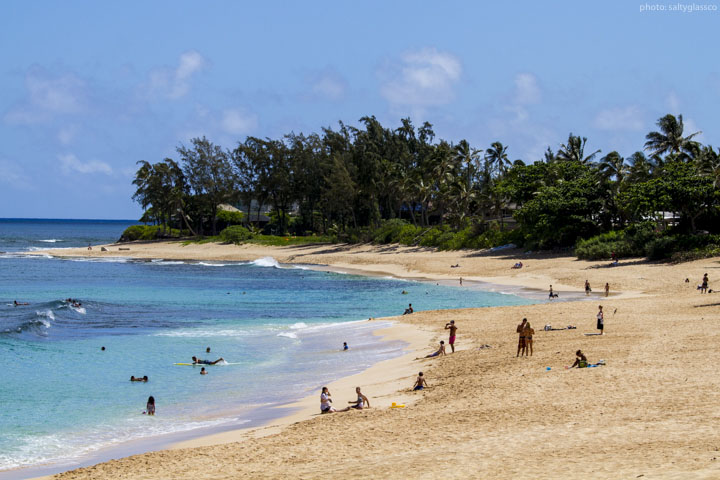 The most famous of the North Shore beaches, “sunset has some of the most spectacular winter surf found anywhere on Oahu,” with steep and shift outside peaks reaching heights of 15 to 20 feet, according to John Clark, author of “Beaches of Oahu.” Bring your sunscreen, a bottle of water and your binoculars — the best breaks are well off-shore — and settle down for a couple of hours. You’re time will always be well spent.
Lifeguards: Yes
Parking: Yes
Restrooms: Yes.
How it got its name: For the many beautiful and multifaceted sunsets that can be seen here, of course.

Velzyland (or V-Land): Kaunala Beach isn’t visible from the road, so look for the public access right of way at the end of Oʻopuola Street and head makai. It’s a good place to see a mix of beachcombers, fishermen and surfers without a lot of tourists, but the dangerous currents and shallow reef make it unfit for swimming or wading.
Lifeguard: No
Parking: No
Restrooms: No
How it got its name: Dale Velzy, one of the first commercial surfboard manufacturers in California, surfed here in the early 1960s.

Waialaeʻe Beach Park-Pahipahiʻalua Beach: A long, wide and sandy beach stretch of undeveloped beach, this is one of the lesser visited sites along the North Shore, with some nice calm areas for swimmers when the waves aren’t too big. But when it’s big, the currents get strong and the area lives up to its name, which means rippling or stirring waters. When you’re driving up the Windward Coast toward the North Shore, Pahipahiʻalua is the first great North Shore vista, the one that always takes your breath away with a sense of anticipation for all the bigger, more famous spots to come.
Lifeguards: No
Parking: No
Restrooms: No.
How it got its name: For the “rippling or stirring water” that could be seen at one time as a freshwater stream bubbled up offshore.

Kawela Bay: Usually, the big sweeping curve of Kawela’s white beaches are safe for swimming and even better for taking long walks. Even when the waves are big offshore, the currents and waves inshore are much gentler. However, the water in winter months sometimes get churned up by the offshore waves and sediment from a nearby river.
Lifeguards: No
Parking: No
Restrooms: No.
How it got its name: Literally, it means, “the heat.” 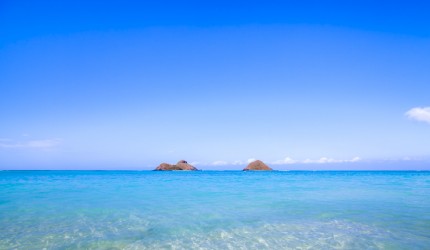 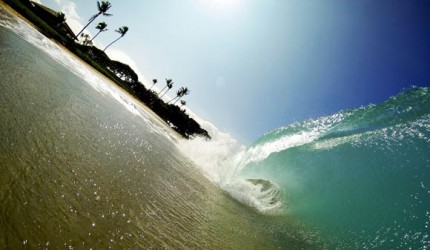