If you come to Hawaii for the beaches, then you will not be disappointed. Hawaii beaches are among the most beautiful and exotic in the world. We have long stretches of soft white sand caressed by warm blue water. We also have black sand, green sand, and red sand beaches. We have beaches where waterfalls cascade into the ocean from sea cliffs, and beaches made of millions of tiny, round pebbles. We have calm beaches were babies like to play, and we have some of the mightiest waves the world has ever seen. When it comes to beaches, Hawaii has it all. 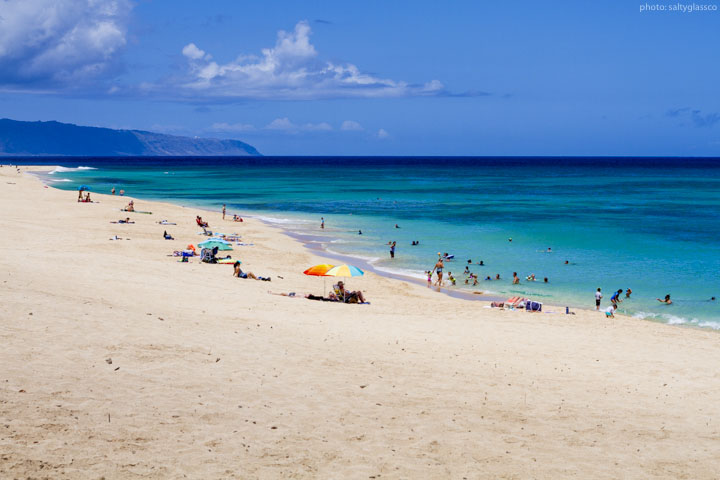 Does Waikiki Live Up to Its Hype?

Is Waikīkī Beach the most famous beach in the world? Quite possibly. The iconic image of white sand, blue water and Diamond Head is known the world over. And, quite honestly, Waikīkī Beach lives up to its hype.

You could spend an entire two-week vacation in Waikīkī and never want for sights to see or things to do. The weather is near perfect. The waves are gentle and perfect for beginning surfers. The underwater world is teeming with rainbow colored sea life. Yes, you could make a vacation out of Waikīkī Beach, not to mention the surrounding attractions, world-class shopping and foodie joints.

There are, however, so many other sides of Hawaiʻi to see. Take for example Hawaiʻi’s colorful beaches. Hawaiʻi is the only place in the world where you can sink your toes into white, black, green and red sand. Hawaiʻi is also home to secluded beaches that can only be reached by swimming to shore. Intrigued?

Let’s start our journey on the largest and southernmost island of the Hawaiian archipelago, the Big Island. This is where you can find Hawaiʻi’s green sand beach, Papakōlea. The journey to reach Papakōlea is not an easy one. You must either rent a four-wheel drive vehicle or walk a 5-mile round trip trail along the arid coast. The rewards are rich, however, as you let the green, volcanic olivine sand crystals fall through your fingers and cool off in the aqua waters. Papakōlea green sand beach is located near the Big Island’s South Point, or Ka Lae.

Travel up the coast with the mountains on your left and the ocean on your right and you will reach Punaluʻu, the Big Island’s most popular black sand beach. Punaluʻu is easily accessible, and there is much to explore here including a lily pond. Keep an eye out for Hawaiian green sea turtles, as Punaluʻu is one of their favorite resting places.

Punaluʻu might be the most popular black sand beach, but it is not the only one. Hilo is laden with black sand beaches. And further up the coast to the north of Hilo in the districts of Hāmākua and North Kohala, you will find valleys such as Waipiʻo and Pololū where rivers flow to meet the sea at expansive black sand beaches.

Exotic green and black sand are sights to behold, indeed. However, the Big Island’s South Kohala and Kailua coasts have several stunningly beautiful white sand beaches. Kaunaʻoa Bay and Hapuna Beach are the best among them.

The island of Maui is our next stop. A visit to West Maui will reward you with most of the island’s best beaches such as Kāʻanapali, Kapalua and DT Fleming Beach Park. Golden sands slope gently to inviting waters.

During the winter months, surfers flock to favorite surf spots such as Honolua Bay and Peʻahi, also known as Jaws. You can perch on the cliffs to watch the action or take the Road to Hana for a completely different experience.

The Road to Hana is long, winding, and scenic. This is the route to Hawaiʻi’s red sand beach, Kaihalulu. The trail to Kaihalulu has its risks and should be hiked with caution. A safer, and just as beautiful, option is Waiʻanapanapa State Park. Here you can walk a black sand beach, explore sea caves and lava tubes, and take in the wonder of a blow hole.

From the island of Maui, you can take a ferryboat over to the much smaller island of Lānaʻi. From the ferryboat harbor, walk on over to Hulopoʻe Beach and spend some time enjoying the expansive white sands, discovering the tide pools and snorkeling the clear waters. Or you can rent a jeep, drive across the island and stroll the long, empty beaches of Lānaʻi’s remote corners.

As we continue our journey through the Hawaiian Islands, the next stop would be the island of Molokaʻi. Molokaʻi, however, is not exactly known for its beaches. Though there are a few good swimming beaches on the island and many wonderful natural places to explore, if you’re looking to do some serious beachcombing, you could skip the island of Molokaʻi entirely. Nevertheless, let it be known that the island of Molokaʻi is traditionally recognized as having the greatest spiritual power of all the islands as well as being the most fruitful.

The Best Beaches on Oahu

Passing over the island of Molokaʻi will bring you to Oʻahu, home of capitol city Honolulu and world-famous Waikīkī Beach. As previously mentioned, Waikīkī lives up to its fanfare, but there are so many more beaches to discover on Oʻahu.

Oʻahu’s great beaches are concentrated in two main areas. The first is Oʻahu’s east side. You will want to start at Hanauma Bay, stop at Makapuʻu Beach, spend some time at Waimānalo Beach and then walk the sandy shores of Kailua and Lanikai. This area is sure to capture your heart and leave you always wanting to return.

The second area of Oʻahu is the North Shore. Here there is a seven mile stretch of coast referred to as the ʻSeven Mile Miracle.’ During the winter months, the best waves in the world can be found here. During the summer months, the beaches are calm and ideal for swimming.

At last we end our journey on the island of Kauaʻi, the northernmost of the main Hawaiian Islands. Technically, there are many more islands to the north of Kauaʻi called the Northwest Hawaiian Islands. The islands are actually a string of coral atolls protected as part of the Papahānaumokuākea Marine National Monument, but that is a story for another day. Today we end our story with the island of Kauaʻi, and in some ways we have saved the best for last.

Know Your Seasons – Summer vs. Winter

The best time to visit Kauaʻi is during the summer months. If you go during the winter months, the surf will be dangerous on the North Shore of Kauaʻi and your swimming will be confined to south shore beaches such as Poʻipū and Kiahuna. South shore beaches are swell, but they do not compare with the majesty of the North Shore, so plan accordingly.

That being said, this is what you do not want to miss. First on the list is Hanalei. Please do not visit Kauaʻi without spending time in Hanalei. This wide lush valley gives way to a peaceful crescent bay complete with a picturesque pier framed by chiseled mountains off in the distance.

One beach along the Nā Pali Coast is accessible by foot or kayak, Kalalau Beach. It is a grueling 11-mile hike or an easier 7-mile kayak from Keʻe to Kalalau. The rewards are powdery white sand, sea caves, a waterfall you can stand under and brilliantly starry night skies. If you make the trip, plan to camp overnight.

From Kalalau Beach, you can swim around the corner to Honopū Beach, which is even more spectacular than Kalalau. There is a natural stone arch that you can walk beneath and another waterfall that you can stand under. The best part is that the beach will be empty but for your fellow travelers. It is illegal to land a boat or even a kayak on these shores. The only way to reach this paradise is by swimming.

Further down the Nā Pali Coast in the direction of Polihale, there are similar beaches such as Nuʻalolo and Miloliʻi. There are a few tour companies that have landing rights at Nuʻalolo and can even provide tours of the archaeological sites. If you’re not athletically inclined, this is the option for you. Miloliʻi is accessible via kayak for the well-conditioned adventurer.

The beaches of Hawaiʻi are as diverse and beautiful as the people who inhabit these islands. It would take a lifetime to explore every shore. Why not get started now?