Tip: Look for this road with 600-plus turns, 50 (or so) one-lane bridges and breathtaking views

Natural beauty aside, Hawaiʻi’s people and culture is what makes Hawaiʻi like no place else on earth. A place brimming with customs and tradition, Hawaiʻi has many annual events that locals and visitors alike can count on year after year. Here are some of our favorites. Keep in mind that this is not an exhaustive list, and there are many smaller festivals that are just as amazing.  Please see our events calendar for more details: www.hawaii.com/events.

January 25, 2020 (Celebrations held Jan. 17 and 18 on Oahu)
Most prominently celebrated in Chinatown, Honolulu, Island of Oʻahu

Honolulu’s Chinatown can light up as soon as early to mid January, but in 2020 primary celebrations will be held January 17 and 18.  You will see red lanterns lining the streets.  Events are planned for weeks preceding the actual Chinese New Year day.  Most events are held at the Chinatown Cultural Plaza. Read more about Chinese New Year’s in Hawaii here. 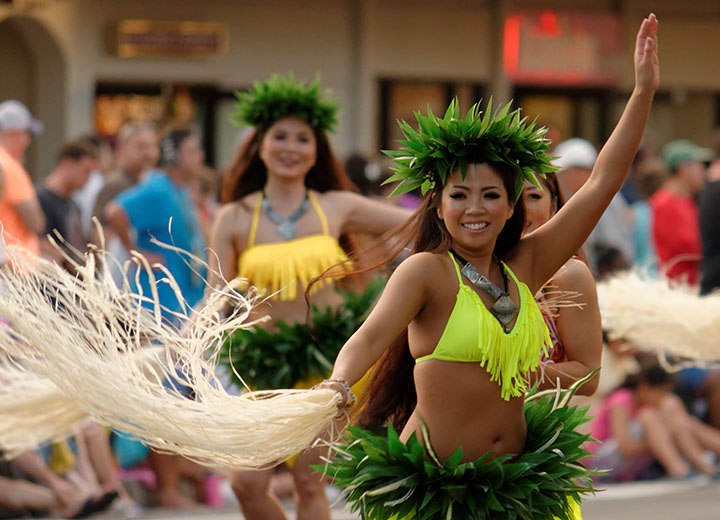 Honolulu Festival is a three day event celebrating the relationship between Hawaiʻi and the Pacific Rim region. You will gain a rich cultural experience with crafts, dance performances and art demonstrations. The event culminates with a Grand Parade that starts from Saratoga Road and continues through Kalakaua Avenue.

Once a year, the normally quiet town of Hilo becomes a hub of activity. Hotels are at capacity and restaurants are overflowing as thousands come from around the world to celebrate the Hawaiian culture and the art of hula (Hawaiian dance) at the Merrie Monarch Festival. Originally started in 1963, The Merrie Monarch Festival is a week-long cultural event created in honor of King David Kalakaua, otherwise known as the “Merrie Monarch,” revered for his role in reviving hula and other Hawaiian arts. The week of the Merrie Monarch Festival is filled with craft fairs, free music and hula performances, art exhibits, cultural demonstrations, a parade, a hō‘ike (show) and more. Each year, the festival starts on Easter Sunday with a ho‘olaule‘a (celebration) at the Afook Chinen Civic Auditorium where local hālau hula (dance groups) perform all day, free to the public.  For actual tickets, you will need to submit a written request.  Please see their website for more information.

May 1, 2020
Celebrated across the Hawaiian Islands.

“May Day is Lei Day in Hawaii Nei.” This popular phrase in the islands prevents anyone from forgetting this special day.

Oahu hosts the state’s largest May Day event. No matter what day of the week May 1 falls on, the Lei Day Celebration takes place at Queen Kapiʻolani Park in Waikiki. The event features live music, a lei contest exhibit, hula performances, demonstrations, craft and food vendors, and more. This event is free and open to the public.

Month of May
Honolulu, Island of Oʻahu

Mele Mei is a month long celebration of Hawaiian music during the month of May, though in recent years the celebration has been starting in April and running through June. Special music series will be held throughout the spring, particularly at Kani Ka Pila Grille at the Outrigger Hotel in Waikiki. The Na Hokuhanohano Awards, Hawaiʻi’s version of the Grammys, is one of the Mele Mei highlights.

Each Memorial Day, thousands of people head down to the shores of Ala Moana Beach for the Lantern Floating Ceremony.  You can launch wooden and paper lanterns into the gentle lapping waters of the Pacific. This unique ceremony is a remembrance celebration that artistically honors the various ethnic cultures of Hawaiʻi.

June 11, 2020
Celebrated across the Hawaiian Islands. Most prominently celebrated on the Island of Oʻahu with a parade from Downtown Honolulu through Waikiki on the Saturday closest to Kamehameha Day.

King Kamehameha Day celebrates Hawai’i’s first Mōʻī, supreme ruler of the entire Hawaiian Island chain. This remembrance of King Kamehameha I, also known as King Kamehameha the Great, is a foundation for layers upon layers of pageantry and tradition. The momentous parade starts at the King Kamehameha Statue in front of the federal building in Downtown Honolulu and commences at Kapiʻolani Park in Waikiki.

The Koloa Plantation Days’ festival is a chance for you to immerse yourself in Kaua‘i’s rich cultural diversity. The event is held every July on the sunny South Shore of the island. The festival celebrates the historical aspects of Koloa and the many different ethnic groups that found their way to the area years ago.

The Prince Lot Hula Festival is the largest non-competitive hula event in Hawai‘i, named in memory of Prince Lot Kapuāiwa who reprised the once forbidden hula in the district of Moanalua. This is a free event open to the public.

The festival has traditionally been held at the Moanalua Gardens.  From a distance the hula festival gives the gardens a look much like a French impressionist painting – people reclining on colorful blankets or strolling under the tree canopy toward food booths and a gathering of traditional cultural practitioners, sharing their knowledge and art.

In 2017, the festival moved to Iolani Palace for the 40th Annual Prince Lot Hula Festival.  Details of the date and location for the 41st annual festival have not yet been released.

A Kamaka ukulele. Photo courtesy of Carlton Chong via flickr.

If you want to experience the magic of the ʻukulele, there is no better place than the Annual ʻUkulele Festival. Listen to various performers of all ages, and you’ll see why this instrument has become so popular around the world.  Please note that the ʻUkulele Festival is the same weekend as the Prince Lot Hula Festival.

One of the gorgeous floats in the Aloha Festivals Floral Parade. Photo courtesy of Hawaii Tourism Authority (HTA) / Tor Johnson.

Aloha Festivals is a week long celebration of Hawaiian music and culture.  There are two main events, the Hoʻolauleʻa (really big party) and the Aloha Festivals Parade.  The Waikiki Hoʻolauleʻa is a great way to soak up the island culture at a fun, casual block party featuring live Hawaiian music, crafts, hula and food.  The Aloha Festivals Parade is a colorful procession of pā‘ū (long-skirted) horse riders, exquisite floats with cascades of Hawaiian flowers, hula hālau, marching bands and dignitaries enlivening Kalākaua Avenue.

Considered to be the most celebrated surfing series in the universe, the Vans Triple Crown was first organized in 1983 and is currently compiled of three separate, high stakes surfing events at various venues along the seven mile miracle stretch of Oʻahu’s North Shore—the Hawaiian Pro, Vans World Cup of Surfing and Billabong Pipe Masters.  There are holding periods for the three events during the months of November and December.  The events are held on the highest surf days of the holding periods.

The infamous Japanese attack on Pearl Harbor, Hawaii, is shown in this Dec. 7, 1941 file photo. The USS Arizona is pictured in flames after being hit. Photo: Paul Walsh.

The year 2020 marked the 79th anniversary of the bombing of Pearl Harbor. December 7, 1941 truly is “a date which will live in infamy” as President Franklin Roosevelt foretold. Three-quarters of a century later, Pearl Harbor is the most visited attraction in Hawaiʻi. And Hawaiʻi pauses each December 7th to remember the losses of the tragic day and to celebrate how far we’ve come since that day.

Hawaii’s Annual Events Create an Artistic Rhythm to Live By

There is a certain rhythm to life in these islands. The changing of the time is measured more by what fruits are ripening on the trees than the temperature outside. And like the mangos making their annual appearance, these festivals add to the special rhythm of life here.  We invite you to join in.

Ask someone about their experience of driving the Hana Highway…