Even though I’d been in Hawaii 20 years or so, it was my Russian friends, new to Paradise, who dragged me to hike the Makapu’u Lighthouse trail. They were intent on exploring every part of the Island of Oahu, while I only sought out the paths less traveled. As it’s one of the most popular POIs on the Island, I had been avoiding the Lighthouse. I didn’t want to struggle with parking and walking room on a path populated with families, strollers, pooches and camera-clad sightseers. How utterly unadventurous and absurdly naïve of me.

That virgin undertaking at the southeastern-most point of Oahu, and I’m hooked, line, sinker and all! I revel in the crowds and excitement on the trail, and parking is easy with recent improvements by the state. Here’s why this trail holds such a draw. It’s not the Lighthouse, because you only see the picturesque structure crowned in red and the white fence leading up to it from a distance. The hike actually wends it way to the top of a hill, bypassing and rising above the off-limits path to the Lighthouse itself. What’s attractive about the hike is: One, it’s a short ascent, just under a mile. Two, the view at the top is breathtaking, of the scenic shoreline of Makapu’u beach stretching toward the North Shore, of southeastern Oahu including the inside of Koko Crater with its distinctly eroded lip, and of off shore islands, crystal tide pools and waves breaking dramatically against the base of the cliff far below. Three, there’s great fluke-slapping, geyser-spouting, wondrously breeching aquatic giants in them thar waters below. Yes, whales!

The stunning Ka Iwi shoreline is now my most frequent morning outing. The wide, paved path is lined with cactuses and windblown brush. As you round the bend for the final stretch to the top of the hill, look up to the left and see a number of WWII pillboxes peaking out of the landscape. Toward the summit, marked by two lookout points, a plaque is dedicated to nine naval aviators who crashed into the hillside in 1942. Meanwhile, the entire stretch offers gorgeous, show-stopping views of the coast and the dreamy, deep blue sea stretching to the horizon.

On this particular day, I’m scouting for humpback whales, which can be spotted in the waters December through May. It’s not a good sign when I’ve reached the top with nary even a spout sighting. The hoard at the lookout, well-equipped with binoculars and telescopic lenses are taking their last disappointed glances when someone screams and points, and we all collectively gasp.

As if on cue, one of our sought after mammoth sea mammals has gracefully risen, its entire body rocketing upward and landing in a grand and glorious slow motion body slap in the deep cliffside waters just below us. But our second collective gasp is even more pronounced. From the shadows of the larger figure, a much smaller black silhouette has just risen and is mimicking the movements of the larger one. It’s a mama and her calf, and the lot of us stand magically glued to the pair for perhaps an hour as they play, with the mommy seemingly teaching her baby all the the right moves. Mom slaps her tail and baby follows. Then comes a large pectoral fin slap, with a reverberating echo that reaches our ears, followed by the softer echo of a tinier pec slap. There’s head slaps and full breaching arches. It’s a firework-packed show, with more twirls and frolicking and splashing than I’ve ever been treated to up on my front row perch. Hana hou mama and little one, hana hou! 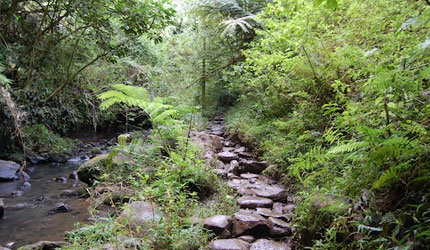