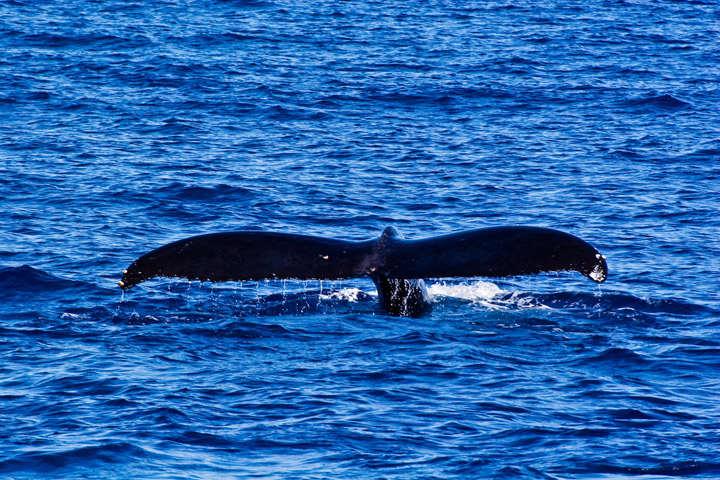 The Makapu’u Lighthouse Trail is a popular hike any time of the year, but from December through April, when humpback whales are in residence, it’s amazing. The trail, leading to a picturesque lighthouse, offers great views and in the winter wild whales will be playing in near-shore waters.

Located on the south shore of Oahu between Sandy Beach and Sea Life Park, the short, paved trail is a relatively easy hike with good views of Koko Head Crater, the windward Oahu coast and Molokai on the far horizon.

The second half of the hike faces east and brings you to a whalewatching lookout where high-power binoculars are available. Humpbacks are known to frequent the waters off Makapu’u Point. But it’s not always easy to spot these enormous 45-foot creatures. Watch for the spray as the whale breathes. If you’re lucky you’ll get a show when the humpback starts flipping its fins, slapping its tail and sometimes leaping from the water in a full breach.

The trail leads along the access road to the Makapu’u Point Lighthouse, built in 1909 and one of Oahu’s most familiar landmarks. Guarded by three locked gates, the lighthouse is off limits to the public. The gates are there to prevent vehicles from accessing the trail. Hikers are welcome.

Not too far from the trailhead, a grassy trail branches off the main paved trail. That trail is what is left of an ancient Hawaiian path around the island called the “Kings Highway”. It leads out to a rock formation called Pele’s Chair and a lookout that is close to sea level.

There is another unpaved rocky path leading from near the whale watching lookout down to a rocky peninsula at sea level. At the bottom, there are large tide pools and a mini blow hole that shoots sea spray up into the air like a whale’s spout.

To get to Makapu’u Point, go east past Sandy Beach Park on Kalaniana’ole Highway. Park along the road just beyond the Hawaii Kai golf course.

Aloha Hawaii.com ʻOhana! Did you know May 29th is Hawaii.com…

Most Popular in Oahu Whale Watching