Maybe you’ve done the snorkeling and scuba diving yet you’d like a bigger thrill. Having an up-close-and-personal shark encounter may be exactly what you’re looking for. Get ready to feel humble in the presence of one of nature’s most perfect predators.

The North Shore of Oahu is where the shark encounter tours originate, usually from Haleiwa Harbor. As you head off the coast, other marine life such as Hawaiian green sea turtles, dolphins, and humpback whales during the migration season. Sharks can be seen from the vessel and guests have the choice of going into the shark cage, a secure enclosure to view sharks through near the surface of the water.

The cage, which floats on the surface of the water, is designed to keep sharks out, not capture them. You’ll be in a cage with plexiglass windows, maybe nose to nose with a shark, but definitely out of harm’s way. These multi-sensory creatures, which predate dinosaurs and have been around for at least 350 million years, are as fascinating as they are dangerous. Read more

To observe them without fear of attack is an awesome experience.The shark cage provides visibility of approximately 200 feet, making it possible to see sharks coming up—and at you — from the deep. You can expect to see sharks ranging from 5- to 15-feet just inches away from the cage.With the exception of man, the shark is considered nature’s most perfect predator. This is a creature that, as an adult, grows seven- to 12-sets of teeth a year, has no breakable bones and actually possess six highly developed senses.On a shark tour, passengers can expect to see gray reef, Galapagos, sandbar and hammerhead sharks. The early Hawaiians worshiped shark gods. In Hawaii, each island had a different god. The king shark god of Oahu is Kamohoaliʻi, who is said to reside in an underwater cave near Pearl Harbor. 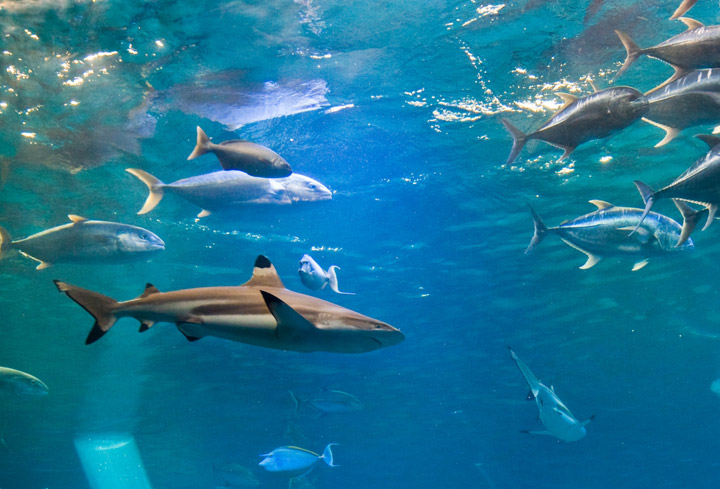 Book a shark tour and watch a school of sharks…