Walk along the paved Kawai Nui Marsh path in Kailua and it’s mostly quiet, with occasional fellow walkers, joggers, bicyclists and families with baby strollers passing reverently by. “Kawai,” referring to water, and “nui” meaning big or abundant, references the 830 acres of protected wetlands that stretch from the path, which is really a flood control levee, to the foot of the ever-magnificent Koolau Mountain Range. In other words, out walking the marsh, you really get the feeling of being in nature’s spellbinding cathedral, complete with bird-hymn.

The marsh is home to numerous migratory, introduced and indigenous waterbirds, including the endangered Hawaiian stilt (aeo), coot (alae keokeo), duck (koloa) and moorhen (alae ula). While there’s birdwatching aplenty, the marsh also boasts dozens of species of fish and other aquatic life, as well as rare, native flora. Kawai Nui was once a thriving fishpond for ancient Hawaiians and is now not only a significant habitat for native species, but also the largest wetland in the state and an important watershed.

I find myself drawn to the marsh after a Kailua farmer’s market visit, where I’ve sipped down a refreshing bottle of leafy veggies blended with mango and ice. I maintain a clipped walk along the shadeless path, under very cloudy skies at noontime (not recommended ― I have the red skin to prove it), and my mind marvels at the wonderment of wildlife teaming in that mass of waterlogged greenery. I watch ducks floating among the reeds and stilt-legged birds that are pecking at the grass one moment picturesquely take flight the next. And I think of a near-travesty a Kailua historian once recounted:

Decades of yore, in the overenthusiastic days of giddy commercialization, when stewardship and sustainability were barely a blip in public consciousness, this very marsh was in the planning stages of becoming but an ambient background for a shopping complex. The structure would be built on a raised platform overlooking what is now a Ramsar-protected (international wetlands conservation treaty) site.

Reading newspaper accounts and community bulletins over the years of how much the Kailua community has done to restore, protect and maintain the area, makes the walk that much sweeter. This is generally my early morning or late afternoon comfort walk, the go-to place for pulling my car right up to beauty’s edge and strolling right in, rather than gearing up for a whole hike. Step after step, I breathe deeply, gaze across this expanse of land that is neither forest nor field, and I raise my eyes to the clouds in thanks to the overseers of nature for preserving this area of such cultural, historical and ecological significance. 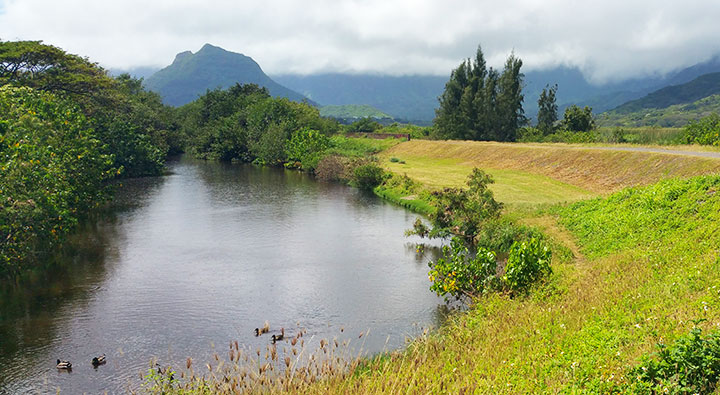 The mile-and-a-half flashes by and my stroll ends at the marsh’s Kailua Road boundary. I turn and head back toward my car. Though I’ve just passed this way, the new vantage point gives me the feeling that I’m seeing the marsh afresh. A mommy duck waddles in my direction through the waterside shrubbery, a string of babes in tow. They disappear into the tightly cropped foliage and then emerge cutely, little stumbling fur balls. A nearby duck chase elicits a flurry of movement accompanied by a lot of quacking and feathers aflutter, as others join in or scatter aside, across the rippling water. I’m thankful to be privy to this eruption of fowl drama ― little do these creatures of instinct know how lucky we all are that they have the habitat to engage in it.

HOW TO GET THERE: From Waikiki, get on the H-1 Freeway heading west. Take the Pali Highway (Hwy 61) exit and follow it as it becomes Kalanianaole Highway (Hwy 72), and then becomes Kailua Road (Hwy 61). As you enter Kailua proper, take your first left onto Kainehe Street, and a second left at Kihapai Street. At the intersection with Kaha Street, turn left and go the short distance until Kaha Street dead ends at Kawai Nui Neighborhood Park. 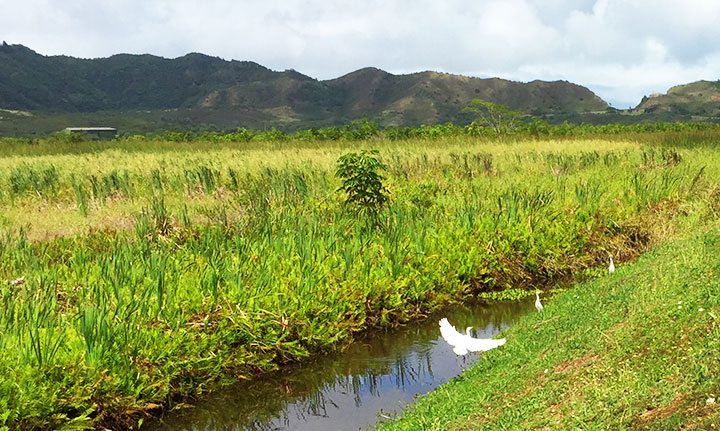 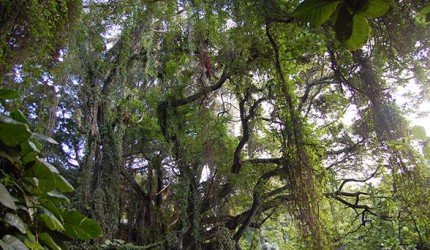