The mammoth boulders, leaves bigger than me and thousands of banyan tentacles swallowing the hillside and dangling from above, give the trail to Kapena Falls a Jurassic feel. When I stand in awe of the ravenous roots of those invasive banyans, I hear the echoing voice of my University of Hawaii biology instructor: “This place is an ecological nightmare!” Nevertheless, the scenic vegetation that overlooks Nuuanu Stream, moody and full of character in this shaded setting, has attracted film crews including from “Lost” and the movie “The Rundown” starring The Rock (Dwayne Johnson).

It was also the neighborhood hangout for adventurous teens when I was growing up. Our stomachs lifted to our throats as we swung off ropes or plummeted from various levels of cliffs (one 40 feet high) into the dark, cool waters. The place still attracts adrenaline-seekers, particularly on weekends, so I chose a recent weekday morning to revisit my childhood haunt. The stroll to the modest 15-foot waterfall begins at a nondescript clump of tall, dry grass. A few steps in and I’m enclosed in a thick forest canopy that makes Pali Highway and busy Nuuanu Avenue, which are just yards away, suddenly belong to another century.

A clear path happens upon clusters of rocks that demand clambering over on all fours. Ancient Hawaiian petroglyphs can be seen just several feet into the path in a small cave on the left, protected by metal bars. Once an obtrusive wall of grass obstructs the path, part it with both hands and trudge right through, even as bits of detritus land in your face, because the large pool, waterfall and cliffs are just ahead.

The place has seen some wear-and-tear since I was a kid, with some of the prominent trees in the area, which we used to swing from, having long ago succumbed to decay. Particularly noticeable is the graffiti that’s run amok over a pile of boulders fronting the Falls. That quickly time warps one back to the present century. It’s still a fun oasis in the middle of Honolulu city, whether as a quiet, reflective stroll on a weekday, or a lively place with shouts and splashing water as youths fling themselves off the highest cliff, trying to out-stylize each other with every manner of creative leap.

TRAIL: Kapena Falls Trail
LENGTH: .5 miles round trip
HOW TO GET THERE: From Downtown Honolulu, go up Nuuanu Avenue, turn right into Nuuanu Memorial Park and Mortuary. Follow the road as it winds to the right toward a small traffic circle and then heads left, ending in a small parking lot. The unmarked trailhead is at the dead end, on the left. 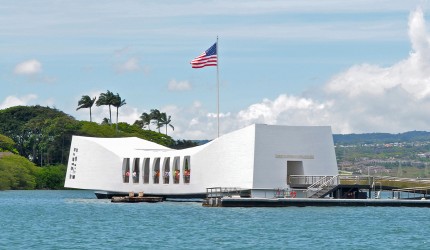