Famed airman Wilbur Wright, known to have invented the first flying airplane alongside his brother, Orville, once had this to say regarding the otherworldly experience of being in the air: “More than anything else, the sensation is one of perfect peace mingled with an excitement that strains every nerve to the utmost, if you can conceive of such a combination.”

Such an enthusiastic endorsement from an expert of the skies more than makes me want to spend as much time as possible pursuing such a sensation as Wright waxes so eloquently about. For those of you who feel the same (and who wouldn’t?!), the following Oahu air tours offer you abundant opportunity to “come fly the friendly skies”…in paradise!

Beginning with an out-of-the-box aerial idea, parasailing is a highly enjoyable way to soar amid the skies while simultaneously soaking in the beautiful baby blues Read more

and other vibrant hues of the sparkling Pacific swirling below. Three Oahu companies offering this exciting excursion include, X-Treme Parasail, Hawaiian Parasail, and SeaBreeze Water Sports.

For those looking to experience a more traditional air tour route, several Oahu companies offer you the once-in-a-lifetime opportunity to soar above the island’s most famous landmarks aboard a helicopter. Imagine being whisked up and whirring your way across Oahu via an exhilarating Hawaiian heli-tour. High above the hustle and bustle, traffic and other tourists, take in the lush valleys, stunning coastline and even some of Oahu’s lesser-known remote locations, all in the comfort of top-of-the-line helicopters humming through the clouds.

Many tour pilots will even share fascinating facts regarding the island’s rich history and topography as they navigate their ways above Oahu’s most treasured and revered hotspots. Among the island’s favored tour operators are Blue Hawaiian, Paradise Helicopters, and Makani Kai, each offering abundant options to appreciate Oahu from above.

Finally, if you are one of those hi-intensity, sky-high adventure and adrenaline seekers, skydiving may just be the perfect way to plummet your way through the skies of Hawaii Nei! Considered to be among the top destination in all the world for skydiving, Oahu’s North Shore is where it’s at according to experts on the subject. Two tour companies—Skydive Hawaii and Pacific Skydiving—are the two primo providers. Literal neighbors, the companies are both located at Dillingham Airfield on Oahu’s North Shore and invite anyone brave or crazy enough to fling him or herself out of a plane to an unforgettable island air adventure.

So whether you take the more traditional route and whir your way across Oahu via helicopter, or launch yourself with reckless abandon into the great Pacific blue skies attached to a parachute, this island has more than ample opportunities to achieve that “perfect peace mingled with excitement” that Wright so adored. 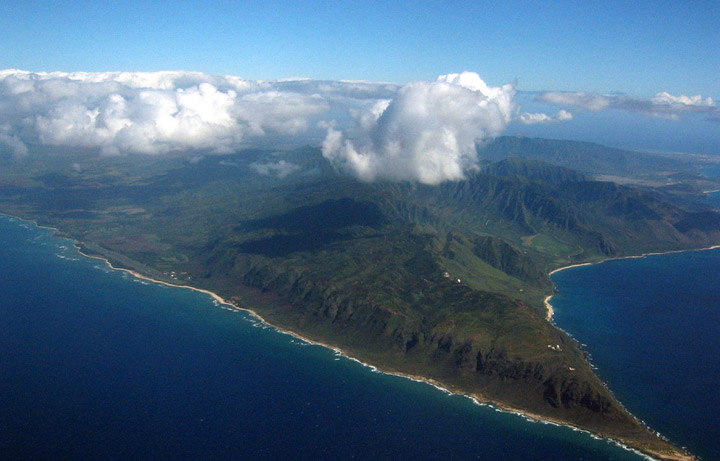