You're currently on: Home OahuEvents

By Andy Beth Miller
| Favorite This Each year, Honolulu, the epicenter of Hawaii’s “Gathering Place” island of Oʻahu, gathers together all who represent and support LGBTQ rights and community for the annual Honolulu Pride festival and parade. Created by the Hawaiʻi LGBT Legacy Foundation, the festivities take place yearly in mid-late October and represent the Aloha State’s largest lesbian, gay, bisexual, transgender and queer community event. Last year’s 2016 gathering was a great success, bringing together the Islands’ richly diverse and thriving LGBTQ community alongside supporting friends, families and fans. What ensued was two nonstop weeks, filled to the gills with good times and great vibes, centered on celebrating all things LGBTQ — specifically the bonds of love, friendship and absolute aloha that connects us all. The apex of the event — the Honolulu Pride Parade — which first began in 1990 was attended by a plethora of locals and visitors alike, boasting more than 3,000 enthusiastic attendees cheering on a prismatic procession of 115 floats spanning every color of the rainbow, 60 parade entrants and 1,000 participants. An estimated 20,000 viewers worldwide also took in the festivities from fields afar thanks to Olelo Community Media and special celebrity hosts Keoki Kerr and Jodi Leong, which broadcasted the 2016 parade online for a worldwide audience to also enjoy. And this year promises to be just as well-attended and super fun. Scheduled for October 20, 2018, the Honolulu Pride parade will make its way down Honolulu’s main thoroughfare of Kalākaua Avenue, the culmination of a week of Honolulu Pride happenings held previous. In addition to this magical main attraction, the festival will also feature an impressive lineup of talent, including exciting live acts, as well as a vast variety of LGBTQ-friendly bars and local restaurants which will provide delicious tropical island-inspired drinks and ‘ono grinds.

For more information, visit hawaiilgbtlegacyfoundation.com/pride and click here for the 2018 Honolulu Pride festival schedule of events.

Most Popular in Oahu Events 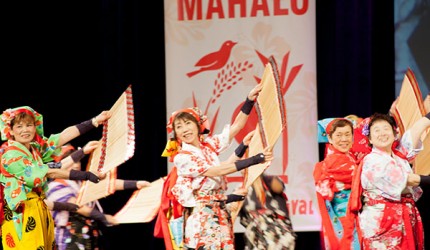