The Whales are Singing 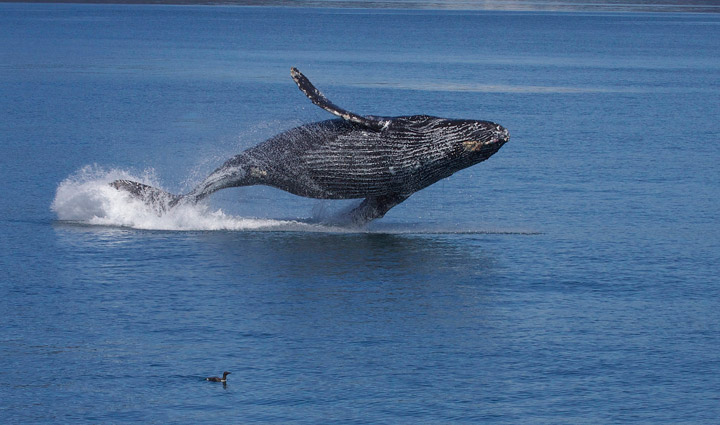 A talented humpback is singing his eerie song to the deep. This is no improv event; this 40-ton dude is serious. He’s in position with his head pointed down and his tail sticking up about 50 feet below water. His audience, mostly other guys, is about a half mile away. His range is remarkable, from the highest and lowest frequencies that can be heard by the human ear. His song is complex. He’ll moo and croon and chirp for maybe 15 minutes giving a performance that can be heard for miles. Then he’ll start all over again.

The lyrics are a mystery, and it’s not clear how humpbacks, who don’t have vocal cords, produce the intricate tunes they sing. But you can bet, there’s only one song per season and any humpback that sings will sing the same tune as his brothers. It’s a guy thing. Females don’t sing.

It would be nice to think the whales are singing because they’re happy to be back in Maui. But no one really knows. Since humpbacks come to Hawaii to breed, researchers have speculated that their songs are related to mating behavior. Others don’t agree. Why whales sing and what they’re trying to communicate remains largely a mystery.

Just as their migration habits are hard to understand. Every year they leave their fertile feeding grounds in Alaska and swim about 3,500 miles to Hawaii where they proceed to fast. For some reason, they don’t eat here. Instead, they mate, give birth and nurse their young.

Though the humpbacks, which are the fifth largest of the world’s great whales, frequent all Hawaiian islands, Maui is their favorite destination. Maui County’s four-island group provides a natural shelter not found on other islands. In close proximity, the islands form a shallow basin with the average depth of water about 300 feet. Humpbacks prefer relatively shallow water and tend to congregate near shore particularly after a calf is born.

Maui celebrates the annual arrival of the humpback crowd with more enthusiasm than any other island in Hawaii. Events are planned, there’s a parade and any vessel capable of taking on passengers will offer a whale watching tour. Thousands of visitors come to the island each year hoping to catch sight of a whale. There are so many out there that most companies guarantee sightings or another trip free.

There was a time when commercial whaling reduced the North Pacific humpback stock to critically low numbers. The whales are now considered an endangered species and protected under federal laws. Under protection, the North Pacific stock has grown to an estimated 10,000 to 15,000 animals. About 60 percent of them migrate to Hawaii.

Humpback whales exhibit a variety of behaviors that should be visible in one form or another from boats and shoreline lookouts. You might see a whale blow, which refers to the act of breathing and the cloud of water vapor produced above the animal’s head during the process of exhalation. Or you might see a tail slap, a heal slap or, if you’re lucky a breach, which means the whale will have propelled itself out of the water, generally clearing the surface with two-thirds of its body or more. And then in an amazing feat of marine gymnastics, the animal will throw one pectoral fin out to the side and turn in the air about its longitudinal axis.

On Maui, you can buy a relatively inexpensive ticket on almost any tour boat ride out of Lahaina, Ma’alaea Harbor or Ka’anapali and expect to see whales in the wild. If you like your whales by sunset with a cocktail in hand, there are companies that will oblige. You can choose between 150-passenger luxury cruise vessels, 18-passenger high-speed inflatable rafts, catamarans and sail boats.

Many boats are equipped with underwater microphones that pick up the sound of whale songs. Another cool way to hear this plaintiff serenade from the deep is to click on www.whalesong.net or www.jupiterfoundation.org and listen to a live whale concert from Maui.

Aloha Hawaii.com ʻOhana! Did you know May 29th is Hawaii.com…

Most Popular in Maui Whale Watching