The tiny village of Nahiku is known for being one of the wettest spots along the northern coast of East Maui. Although it was once a thriving town, the population has dwindled to less than 100. In recent years, Nahiku has begun to attract wealthy, part-time residents like the late rock star George Harrison of Beatle fame.

The community’s 15 minutes of fame began in 1900 when Nahiku, named after the Hawaiian version of the constellation Pleiades, became the site of the Nahiku Rubber Company—the only commercial rubber plantation in U.S. territory. The company went down the tubes in 1912 because the heavy rainfall yielded poor quality latex. Today rubber trees line the road to the little community, and it’s probably best known for the Nahiku coffee shop, a smoked fish stand and a gallery.

It is located off Hana Highway (360) on Nahiku Road between Wailua and Hana. Watch for mile marker 25, turn left about 50 yards after the sign and follow Nahiku Road about three miles down to the bay. Nearby is the Pua’a Ka’a State Wayside for picnicking as well as the Kopilula and Waikani Falls. The spectacular lower Hanawi Falls is located in Nahiku. 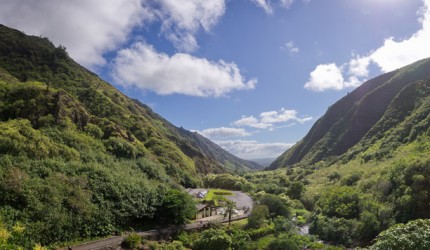 Feel the ‘Mana’ at Iao Valley