You're currently on: Home LanaiWater Activities

Throughout the islands there are tour companies widely acknowledged as institutions. Known for their expertise, reliability and hospitality, these companies come to mind when visitors ask for the best air tour, the best land tour or the best water excursions. On Maui, Trilogy Excursions is one of those companies. The island’s oldest family-owned and operated ocean recreation company, Trilogy has built a legend around its sailing tours to Lanai, its family sailing tradition, its large fleet of catamarans and its homemade cinnamon rolls.

First the rolls. Made from a family recipe and first served by the original Mom Coon, cinnamon rolls hot from the oven greet Trilogy passengers as they start their morning cruise. That’s a tradition that began in 1973 when the Coon family first arrived on Maui following a two-year sailing adventure to the South Pacific aboard the original Trilogy.

The company’s fleet of seven vessels (six catamarans and a jet drive 32′ Zodiac) are used to conduct daily tours to Lanai, Molokini and Ka’anapali. Trilogy is the only company in Hawaii with permission to bring guests to Hulopo’e Beach on Lanai. Trilogy also offers an all-day Lanai eco-adventure, as well as scuba diving, whale watching, a sunset cruise, Lanai jeep safaris and overnighter packages to one of two luxury resorts on Lanai for a day, a week, or more.

Most Popular in Lanai Water Activities 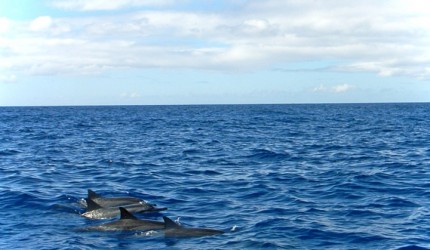