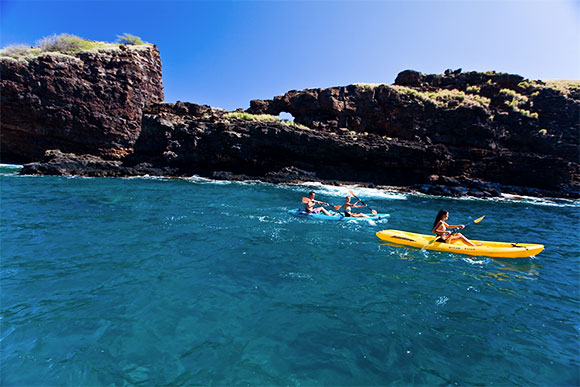 For anyone who’s ever surfed at Waikiki Beach and enjoyed the gently rolling waves, surfing at Lopa on the island of Lanai is almost exactly the same—except, of course, there aren’t other people, and the beach is completely deserted, and the buildings, restaurants, stores, and resorts are replaced by long rows of trees.

Unlike islands like Maui or Oahu—where rental stands full of snorkels and surfboards are as common as tradewinds in summer—Lanai is a little more do-it-yourself when it comes to playing in the water. Like most things requiring extra effort, however, the reward is better as well, as the island of Lanai is home to some of the best reefs and water activities in the state.

Out of all the water activities on Lanai, snorkeling the reef at Hulopo‘e Bay is the most easily accessible for visitors, as it’s possible to ride the ferry from Maui and walk to the white sand beach. This stretch of sand was named as America’s best beach in 1997, and conveniently fronts the luxurious Four Seasons Manele Bay resort. On the left side of the bay, enormous parrotfish nibble on coral amidst schools of yellow tang, as bashful octopus dart between rocks and goatfish scour the sand. Occasionally, pods of Hawaiian spinner dolphins will splash and rest in the bay, and they usually frequent the right side of the bay above the patches of sand. Another popular snorkeling spot on Lanai is just off Manele small boat harbor, where a vibrant reef sits just offshore at the base of the coastal cliffs. Read more

In summer, Hulopo‘e Bay is also home to some of the best surfing on Lanai, as a long, reeling, left-hand wave brings surfers out in droves. The size of the crowd is relative, however, when compared to Waikiki, as a “crowded” day at Hulopo‘e Bay is anything over six people. Since the wave at Hulopo‘e is somewhat challenging and isn’t good for beginners, Lopa Beach on the southeastern coast will often have gentler conditions. Reaching the isolated beach, however, requires an off-road, 4×4 journey that lasts for over an hour, and requires providing your own transportation as well as boards, water, and food. Just reaching the beach is an adventure in itself, and it’s also a popular spot for kayaking and exploring the undeveloped coast.

Finally, aside from surfing, snorkeling, and kayaking, scuba diving is arguably the most popular water activity on Lanai, as the offshore reefs, caverns, and caves offer some of Hawaii’s best diving. At the moment, however, the only way to go scuba diving on Lanai is on a charter from neighboring Maui, as there’s currently no dive shop or land-based instructor offering trips to the offshore reefs. All of that could change, however, as resorts re-open in the future, and should you ever have the chance to go diving off Lanai, try to see if you can dive “Cathedrals” set just off the coast of Manele—where there have literally been a couple of underwater weddings inside the volcanic dome.