You're currently on: Home LanaiThings to Do

The Garden of the Gods on Lanaʻi. Photo courtesy of Vadim Kurland.

Lanai’s best qualities lie in its natural attractions and historic sites. Slip on your walking shoes and explore:

• The Munro Trail:
If you think you’ve seen all you can see on this intimate island, hike the
seven-mile Munro Trail through mountainous grasslands and
rain forests to the island’s highest point, Lanaihale. At 3,370 feet the
world unfolds beneath you: On a clear day you can see all the way to
Maui, Molokai, Hawaii, Oahu, and the uninhabited Kaho’olawe.

Where: Trailhead is off Keomoku Highway in the Lanaâ€˜i City area

• Spinner dolphins at Hulopo’e Beach:
Not only is Hulopo’e Beach the premier beach park on Lanai â€” with
golden sand, azure waters and swaying palm trees â€” it’s also a
Marine Life Conservation District. So even if the dolphins are having a
shy day, snorkelers are sure to see clouds of tropical fish. Good spot
for the kids, with a tide pool in the lava rocks on one side of the bay,
restrooms, barbecues, and a grassy area.

Where: Near the Manele Bay Hotel on the island’s south coast

• Kanepu’u Preserve:
This area, full of rare plant life, is now under the stewardship of The Nature
Conservancy. The preserve’s rare and endangered native species
include Lanai sandalwood, Hawaiian gardenia and cousins of olive
and persimmon.

Where: Northwestern part of the island

• Luahiwa Petroglyphs: Rock drawings on boulders with a mix of ancient and historic styles. Note: The petroglyphs are fragile; do not handle or disturb. Located on a steep slope overlooking the Palawai Basin.

• Garden of the Gods: Lanai’s upland plateau is dotted with boulders of every imaginable shape, size and hue. Though the eroded canyon was once considered a sacred spot where island residents built shrines to their gods, most of the intriguing rock arrangements you’ll see these days have been created by visitors. Go early in the day or late in the afternoon, to beat the heat. Located in northwestern Lanai.

Most Popular in Lanai Things to Do

Hit the Trails on Lanai 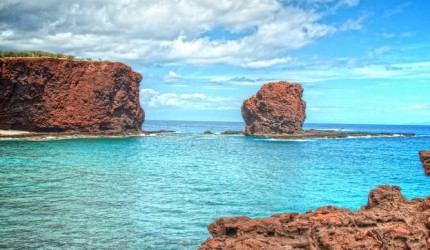