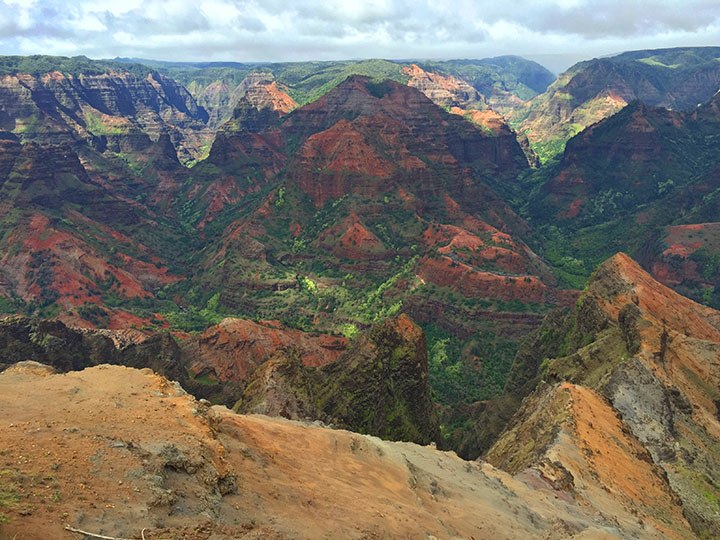 How do I put into quantified terms the limitless beauty of Waimea Canyon, Kauai’s Grand Canyon of the Pacific, as it’s been popularly called? I’ve taken my family camping in the ever-resplendent hills of Waimea Canyon State Park, and I’ve run its various trails and driven its winding roads time and again. Yet, with every visit I discover a new vista point, a new path, a type of flower I’ve never seen before. Each time, I’m awed all over again by the sheer vibrancy of the deep red tones that run in horizontal layers along the canyon’s walls. The majestic red is offset by equally vibrant patches of golden ochre and spots of lush greenery. Depending on the vantage point, a cascading white column occasionally appears, a sort of teasing enticement in a far crevice of the canyon. Right before my eyes, a light rain or a drift of clouds will dramatically shift the hues so that the bewilderingly splendorous colors of the canyon are never the same from minute to minute, from daybreak to dusk. Today, I’m relishing the beauty of the drive itself, from the road’s meandering bends to a stream I’ve never before noticed, running picturesquely through the red dirt alongside the road. At a turnout point soon thereafter, a Waimea Canyon trail captures my attention. It’s Iliau Nature Loop, which on further exploration, I find is named after the endemic iliau plant, a species found only on Kauaʻi. “Can you believe it’s actually in bloom!” gushes a member of a group embarking on the trail. The group explains that they’ve visited the trail multiple times but have never seen iliau actually in bloom. I suddenly feel quite fortunate to be witnessing a field of hundreds of these distinct plants rising to attention. The way they grow on a long stalk with a flowering of yellow buds spreading out in rows at the top is reminiscent of a kahili or royal Hawaiian staff with its display of feathers erupting from the top. A plaque at the trail-head describes iliau as belonging to the sunflower family and a close relative of the equally intriguing and aesthetically similar silversword, endemic to Haleakala, Maui. Iliau lives between two and 10 years, flowers once and then dies. The fluorescent display happens only from May to July. Looping the path, on my left is the meadow of iliau stalks rising in a surreal multitude of spindly silhouettes against the blue sky. On my right are the plunging cliffs of Waimea Canyon. Breathtaking is the word that most precisely describes the beauty. The short loop takes much longer than the technical distance calls for because of the wonderment of the surroundings. All along the cliff, groups of people gawk in hypnotized silence. All about the meadow, camera lenses aimed at iliau flowers whir, focus and click.

Meanwhile, placards along the path list several other endemic Hawaiian species abundant in the area. There’s the pamakani with its white buds and koa trees, world-famous for their durable wood used for a variety of purposes from bowls to picture frames, and having a rich luster that becomes even more lustrous under the sun’s rays. Also growing here is the ‘uki‘uki which sprouts a cluster of white or bluish flowers and is related to the lily. Its leaves were traditionally used for thatching houses and making twine and its berries were used as a blue dye for kapa, a fabric made from fibre. Kawelu grasses, which grow from coast to cliff in Hawaiʻi, sway in the breeze. They are mentioned in hula chants and said to have inspired the swaying movements of the famous Hawaiian dance. ‘A‘ali‘i is another shrub whose orange and yellow seeds were used to dye kapa and are today used in lei-making. ‘Uki, a sedge used in wreaths, once lined the walls of ancient hale (homes), and the pukiawe shrub once was used as a remedy for colds and headaches and its red berries are used in lei-making. Legend has it that if ali‘i (royalty) wished to roam among common folk, they had to first walk through the smoke of burning pukiawe to remove the kapu or taboo.

Overflowing Beauty Can Be Gulped Greedily by Hungry Eyes To walk the loop and read the placards is an enthralling lesson in culture and botany. For miles and miles, Waimea’s quantity of overflowing beauty can be gulped greedily by hungry eyes peeled out the windows of a car and at quick pitstops at overlooks, or it can be savored slowly with deliberate, focused attention in a designated area. There’s something about that concerted exploration that sits like a studded gem in the walls of one’s memory, rather than dizzying the mind in an intoxicated rush like a a quick tour of those multi-faceted views of the canyon is wont to do. After today’s adventure, I’ll certainly be back to more thoroughly explore concentrated areas of the glory that is Waimea Canyon.

HOW TO GET THERE: From Lihue, take Highway 50 heading west. Turn right onto Highway 550/Waimea Canyon Drive. Continue on Waimea Canyon Drive for nearly 9 miles until you see a trail-head sign on your right for Iliau Nature Loop (listed with Kukui Trail, which also begins at this point).

Most Popular in Kauai Hiking 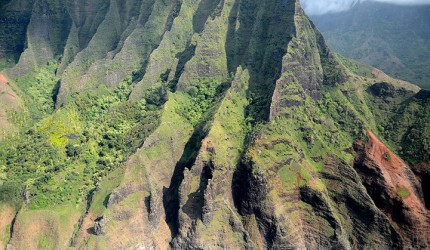