You're currently on: Home KauaiBeaches

Polihale, an uncommonly beautiful beach, casts an almost sacred spell on all who visit. Isolated and other-worldly, Polihale beach hugs the shore below steep mounds of blazing, white sand called Nohilili Dunes. At the end of an old sugarcane road, Polihale is the site of ancient Hawaiian temple ruins, originally constructed at a point over the ocean where Hawaiians believed the souls of the dead departed for Po, the underworld.

Located near the Pacific Missile Range Facility on the island’s west side, Polihale’s huge expanse of white sand beach gives way to neon-blue water that seems to stretch from here to eternity. The water is warm and the sand hot enough to burn your feet. At sunset, the sky turns purple and orange, the sand cools and the beach becomes quiet and peaceful. To the north, serrated cliffs mark the beginning of the Na Pali Coast. Seemingly transplanted from an Egyptian valley, they turn a rich brown in the golden last light of day. Mauka (toward the mountains), the interior highland forests of cool Koke’e hint of the moist weather just miles to the east. To the west, the sun sets fiery red beyond distant Ni’ihau Island.

Driving to Polihale Beach is Not Easy, But It’s Well Worth It

There is no easy access to Polihale. Take Hwy. 50 (Kaumualii Highway) past Kekaha and the main gate of the Pacific Missile Range Facility. Watch for a sign on the left that says Polihale and follow the dirt road to a small state park with camping facilities. Park here and walk down to the beach.

This is one of the world’s most beautiful beaches, but it will never be ranked among the nation’s best. The ocean currents are unpredictable and have swept people to their death. There are no lifeguards, but there is an emergency phone. Still, if you get in trouble, help can be a long time coming. The nearest stores are in Kekaha and Waimea so stock up with food and drink before driving out. There are shower facilities, but no potable water.

Most Popular in Kauai Beaches 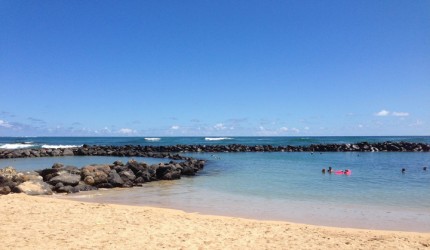