Hawaiʻi is considered a paradise for many location scouts. With so many climate zones to choose from, TV show directors can get a good bang for their buck when aiming to create shows depicting a wide variety of backdrops. From hit series to short-lived flops, there’s no shortage of television shows filmed in Hawaii. Here is a list of some of the shows — from long-running classics to one-hit wonders — filmed in Hawaii’s tropical paradise.

This iconic 1960s sitcom follows the antics of seven shipwrecked castaways stranded on a deserted island. The series was shot on location at Coconut Island, less than a quarter mile from Kaneohe Bay on Oahu. Some scenes were also filmed throughout the island of Kauai.

The original Aloha State crime series, Hawaiʻi Five-O made its debut on CBS in 1968. The opening theme song included shots of the monster waves on the North Shore of Oahu, gorgeous Waikiki sunsets and bird’s-eye views of Honolulu. This TV classic filmed all 12 seasons on the island of Oahu. In 2010, the series returned with new episodes of the adventurous crime-fighting crew.

This hit series, starring Ricardo Montalbán, is set on an island in the middle of the Pacific Ocean and follows the adventures of visitors wishing to make all their fantasies come true. The series featured famous locations on Kauaʻi, including the Na Pali Coast and Wailua Falls.

Tom Selleck starred as the iconic private investigator, Thomas Sullivan, in this hit 80’s TV series. Sporting the famous red Ferrai and strategically buttoned aloha shirt, he stole the hearts of women all over the world. Magnum P.I. ran for eight seasons and was filmed on locations around Oahu. The reboot starring Jay Hernandez as Sullivan premiered in 2018.

The ABC family drama, The Byrds of Paradise, ran for only 13 episodes and followed the life of a single father and his three children as they adapted to life in Hawaiʻi from their Mainland roots.

The mysterious island location for this six-season hit was filmed on the island of Oahu and is considered one of the most expensive TV series ever produced. Sources say the pilot alone cost over $14 million. Filming locations included Mokuleʻia Beach, Kualoa Ranch and the banyan tree near Turtle Bay Resort

Created for young adventurers, this series was described as “LOST for Kids.” The story follows a group of high schoolers who survive a plane crash and find themselves on a deserted island in the South Pacific. Oahu serves as the backdrop for the series and includes great scenes with Hawaii’s beaches, rainforests and mountains.

Although it ran for only eight episodes, the supernatural horror TV show, The River, included some epic shots of Kahana Valley and Kualoa Ranch on Oahu, which was staged to look like the Amazon rainforest.

ABC’s military drama, Last Resort, followed the adventures of a group of U.S. soldiers stranded on the island of Saint Marina. Filmed on Oahu, the series’ 13-episode run lasted only one season. The series was filmed predominately on Oahu but was not picked up for a second season.

Shots of Hawaii’s majestic banyan trees and tropical rainforest can be seen in Marvel’s TV series Inhumans. The show was shot on Oahu over the course of several months. The show wasn’t met with much enthusiasm and wasn’t renewed for a second season.

Many other TV series shot individual episodes in Hawaiʻi throughout the years. Some shows taking advantage of one-shot episodes include the following:

—
The 2021 NBC series Young Rock, which follows the life of Dwayne “The Rock” Johnson, includes a time period when Johnson and his family lived on Oahu. However, the series has not filmed in Hawaii as of early 2021, opting instead for recreations of the various island settings that are shot in Australia. 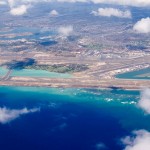