Tip: Squint into a Pacific morning sun and you may see a pod of these creatures spinning like shiny toy tops out of a sun-polished sea

Top 3 ‘Must-Try’ Foods on Each Island

By Lacy Varner
| Favorite This

Here at Hawaii.com, we’re big fans of food. We imagine that most people are and it’s certainly one of the yummiest ways to experience Hawaii.

Therefore, we’ve decided to let you in on some secrets. Every local knows the items that each island is “known for.” When we visit other islands, we always make a point to stop by and get some.

And we wouldn’t want you to miss out on any of this goodness, so behold, the list. We present to you the top 3 ‘must-try’ foods for each of the main islands. As it turns out, each of our top picks can be found in eateries that have been around for at least 50 years. They are places local people having been frequenting their entire lives. So for a true taste of the islands, check a few of these out.

#1. Leonard’s – Malasada
Hawaii’s original malasada bakery, Leonard’s has been serving up these heavenly little puffs since 1962. A malasada is a Portuguese donut, but it’s shaped like a ball and does not have a hole.  At Leonard’s, your malasadas are served hot out of the fryer and there are a few flavor options. You can get your malasada covered in plain sugar (original), cinnamon sugar, or li hing. You can also get them filled with custard, dobash (chocolate), or haupia (coconut). While all varieties are fantastic, we’re purists and prefer the unfilled original or cinnamon sugar malasadas. 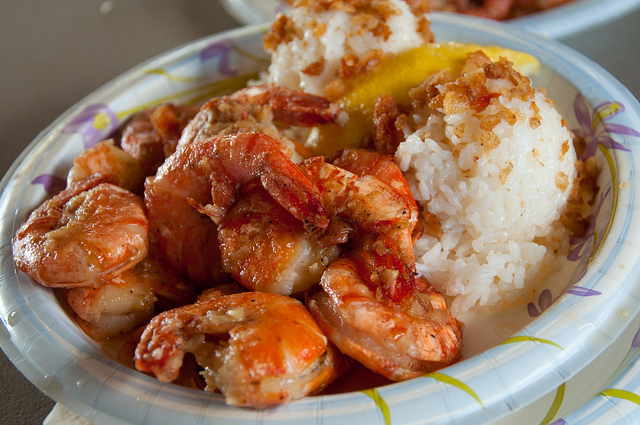 #1. Tasaka Guri Guri – Guri Guri
Don’t you dare compare it to ice cream or sherbet or sorbet; it is an entity entirely its own. Tasaka Guri Guri has been in business on Maui for over 100 years and the family-owned store specializes in one thing – Guri Guri. There are only two flavors, strawberry or pineapple, and scoops are served in a paper cup with a wooden spoon. But when the one item you sell is good enough to keep you in business for over a century, there’s no need to get fancy.

#1. Café 100 – Loco Moco
If you weren’t already aware, the Loco Moco is a staple of local cuisine here in Hawaii and it’s amazing. What’s not to love about a hamburger patty, fried egg, and gravy piled on top of a mountain of rice? The origins of this dish can be traced back to the sleepy little town of Hilo in the 1940’s, but since then, its popularity has exploded. One of the establishments best known for the Loco Moco is Café 100. With over 30 varieties of this dish, you’re sure to find one that will suit you perfectly. 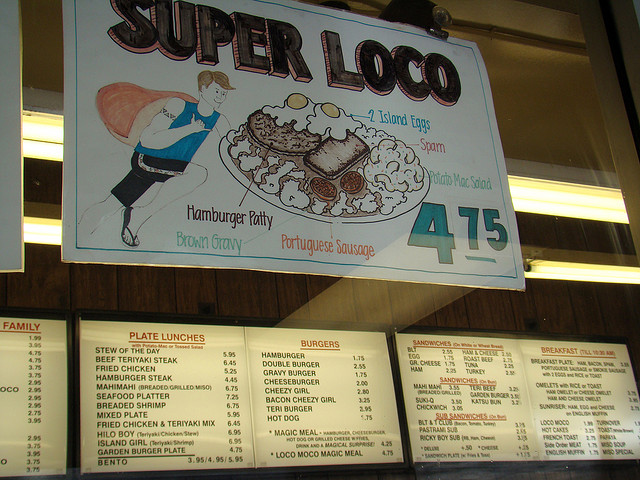 #1. Hamura’s Saimin – Saimin & Lilikoi Chiffon Pie
Noodles and broth. There are many other options that can be added to dress up a bowl of saimin, but those are the basics and they can make or break you. But since Hamura’s has been serving up this local comfort food since 1951, it’s safe to say that they have it down like nobody else. Not much has changed on the menu since then; the wontons are still folded by hand and the noodles still made fresh daily. Hamura’s is old school – small menu, cash only, hole-in-the-wall sort of joint. But aren’t those the best kind? And while you’re there, be sure to grab of slice of the Lilikoi Chiffon Pie. In recent years, its fame has grown to almost rival that of the noodles!

Local photographer David Murphey has found a creative way to…

There is something spellbinding about squinting into a Pacific morning…

If you are making a trip to Rainbow Falls in…

Kealakekua Bay, the Pathway of the Gods

“The Pathway of the Gods”— the pristine underwater sanctuary located…

Hawaii reopening to tourism on September 1, with a catch

Hawaii hotels that are closed due to coronavirus concerns