It’s as common to see a giant Green Sea Turtle as it is rare to catch a look at the nearly extinct Hawksbill Sea Turtle. Both species are considered endangered, but the Hawaiian hawksbill population is estimated at less than 30 nesting turtles. Named for its sharp, beaklike mouth, a hawksbill can weigh up to 270 pounds, much smaller than the hulking green sea turtle, which sometimes weighs in at 400 pounds. Hawksbill turtles are known for their beautiful exterior shell, often referred to as “tortoise shell,” which was exploited for many years by the fashion industry and has driven the species almost to extinction.

In an effort to educate people about this little known and critically endangered species, the Snorkel Bob Foundation has produced an award-winning film called “Hawksbill Babies at Oneloa.” The film shows a rare daylight hatching. A stand-alone version of the dvd, introduced by Snorkel Bob, is free to educators on the condition that the dvd is shown to 50 students and/or friends. Copies are available at snorkelbob.com.

Kahalu’u Beach Park, about six miles south of Kailua-Kona on Ali’i Drive, is a good place to come face-to-face with sea turtles. They also are commonly seen at Honaunau Bay near the Place of Refuge.

Green Sea Turtles, unlike the Hawksbills, are often featured in films about Hawaii, and regularly appear live on ocean excursions. Watch for them feeding on seaweed that grows on the rocks in shallow areas. Called honu in Hawaiian, the turtles are referred to as green not for the color of the algae growing on their backs, but for the color of their meat. Yep, it’s green.

It is believed that Hawaiian Green Sea Turtles can live up to 80 years and most don’t reach sexual maturity until they are about 25 years old, sometimes taking twice that long. Turtles, like salmon, return to where they were hatched to lay their eggs. Every second or third year, turtles migrate hundreds of miles to nest. Each female will lay two or three clutches of 100 to 110 eggs each before swimming back to its favorite resting and feeding area in the protected waters of the inshore reef.

Look but don’t touch. Protected by the Endangered Species Act, it’s against the law to harass both Hawksbill and Green Sea turtles in any way, including touching. So if you see one when you’re snorkeling, give it 10 to 15 feet of space and enough room to surface and breathe. 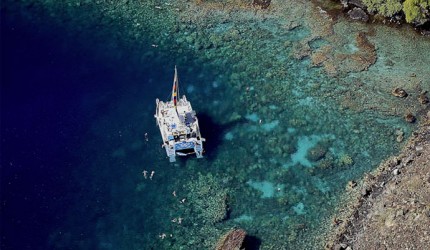