Volcano on the Big Island

There’s something magical and mysterious about new land being created and the Island of Hawaiʻi is one of the few places in the world where one can get a front row seat to Earth’s birthing process. Kīlauea Volcano began erupting in 1983 and currently shows no signs of slowing down. This extended eruption makes Hawaiʻi Volcanoes National Park the state’s most popular tourist attraction, bringing over a million visitors to the island every year.

The 377-square mile park is home to both Kīlauea and Maunaloa volcanoes, both helping form the Island of Hawaiʻi almost half a million years ago. With Maunaloa’s last eruption in 1984, Kīlauea is currently the star of the show when it comes to visitors wishing to catch a glimpse of its molten lava flow.

On Hawaiʻi Island lava lovers can experience the powerful force of nature like nowhere else. Kīlauea volcano is the youngest volcano in Hawaiʻi and the most active volcano in the world. Documentation of Kīlauea’s activity began in the 1820s when visitors from around the world began to descend upon this magnificent tropical hot spot.
Read more

Unlike the steep, conical volcanoes built in middle school science classes, Hawaiʻi’s volcanoes are “shield” volcanoes. Shield volcanoes create lava flows that gently glide down the slope of the mountain rather than spew out the top of the cone. At certain times, the flow reaches the ocean and performs a dramatic, steam-filled entrance. Witnessing this process of earthly creation and destruction is what draws people near and far to this island paradise.

The central crater of Kīlauea volcano is called Halemaʻumaʻu and, according to Hawaiian legend, is the home of Pele, the fire goddess. Since its eruption in 1983, Kīlauea had produced hundreds of square miles of lava flow and added new coastline to the Big Island. The best way to experience this primal wonder is to visit Hawaiʻi Volcanoes National Park.

Established in 1916, the park extends from the summit of Maunaloa down to the ocean’s coastline. With 150 miles of hiking trails traversing through rainforests, deserts and volcanic craters, the natural diversity of the park is truly extraordinary. Visitors can also walk through a lava tube, search out petroglyphs and peruse the museum.

The best place to start this volcanic adventure is to visit the Kīlauea Visitor Center and get acquainted with the park through films, maps and ranger-guided activities. Next, the 10.6 mile drive along Crater Rim Drive that circles Kīlauea Caldera and contains all the park’s primary attractions including two overlooks, Jaggar Museum, Halemaʻumaʻu Crater, Devestation Trail and Thurston Lava Tube.

Weather is variable so visitors are advised to wear layered clothing and close-toed shoes. It’s a good idea to bring sunscreen, water and snacks as well. And of course, don’t forget the camera!

Volcanic activity in the national park is unpredictable, varying from day to day. Call 808-985-6000 for recorded updates. 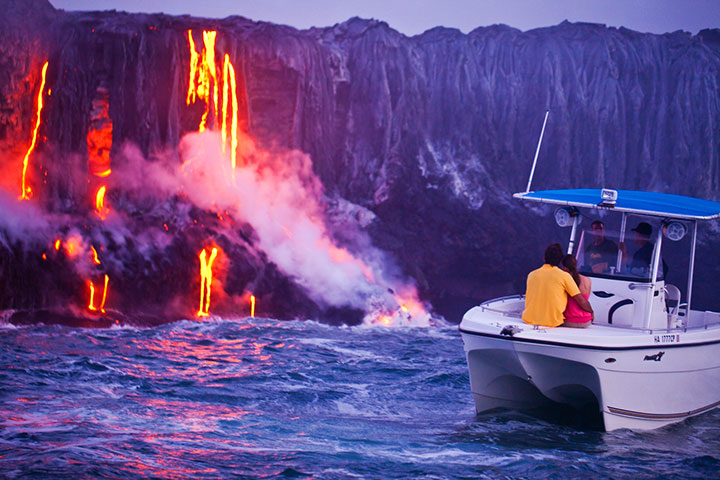 Hawaii is among one of the most isolated and exclusive…

TripMasters.com was founded by Solar Tours Inc. as our brand…