You're currently on: Home Big Island
Pick an Island

Places on the Big Island

There is more than 250 miles of diverse coastline on the Big Island along with a smattering of small towns, desolate lava fields, glistening black and white sand beaches, lush forests, snow-capped volcanoes, and powerful waterfalls. You will need more than just a few days to properly explore all the island has to offer, but each place you visit on the Big Island will provide a different adventure well worth the time it takes to get there.

Ask any local, and they will tell you that Hilo is mostly known for its fair share of rainfall. The upside is the lush vegetation all this moisture creates, which can be enjoyed at one of the area’s several botanical gardens. Because of the unpredictable wet weather, it’s likely you won’t be hanging out at the beach in Hilo — and that’s just as well, seeing that the area’s sand beaches are sparse.

Continue your exploration of the island by driving the scenic Hamakua Coast that winds through small plantation towns and offers a glimpse of the “real” Hawaii: untouched valleys, expansive forests and quaint villages. Along the Hamakua Coast, you can stop at Akaka Falls to see not one but two awesome waterfalls, stargaze atop Mauna Kea, or explore deep in Waipio Valley by horseback.

In South Kohala, Waimea, also known as “paniolo” (Hawaiian cowboy) country, offers a completely different experience from the rest of the island. This town is full of rolling green hills, large open pastures, cooler temperatures, morning fog, and lots of cattle, sheep and horses (some hanging out in people’s front yards). There are some really great restaurants here, a fantastic theatre featuring live acts just about every weekend, and several rodeos a year. Yee-haw!

The Kohala Coast is also home to most of the white sandy beaches on the island. South Kohala’s Waikoloa is where you go to eat food from cutting-edge chefs, do some shopping and relax beachside (or poolside if you prefer.) The area has all the amenities of resort living you could ever wish for.

The North Kohala area includes the towns of Hawi and Kapa‘au, old sugar plantations that have been turned into artsy enclaves. There are lots of fun treasures to seek out at local shops and galleries here.

Kailua-Kona’s Ali‘i Drive is where you’ll find most of the touristy restaurants and souvenir shops today, but the region is also home to some amazing historic sites as well. Kailua-Kona is where King Kamehameha I died in 1819, and also where the first Christian missionaries came ashore in 1820.

Unlike Hilo, Kailua-Kona is sunny almost year-round and conditions are hot and dry. People on this side of the island like to frequent the beaches or partake in some of the amazing ocean activities including, snorkeling, diving, kayaking, charter fishing and whale watching.

The Kona region (specifically south of Kailua-Kona) is the heart of coffee country as well. Take a tour at one of the coffee farms and sample one of the island’s finest crops. Everyone knows Kona coffee, but the southern Ka‘u area is also known for its internationally acclaimed coffee that receives accolades at coffee competitions worldwide.

Another place to see on the Big Island is windswept Ka Lae, whose claim to fame is that it is the southernmost point of land in the United States. Also known as “South Point,” the entire southern tip is registered as a National Historic Landmark, as it’s scattered with the ruins of heiau (temples) fishing shrines and other cultural relics. A trip here is an opportunity to experience the raw power of Mother Nature. 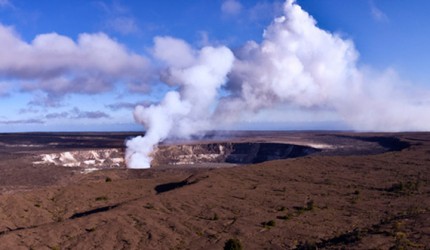 Here are a few activities to add to your next visit to the Orchid Isle.

History and Beauty Define the Sleepy Town of...

The Island of Hawaiʻi is a utopia of splendor. With…

Tucked away among the slopes of Kohala mountain is the…

It’s no surprise Hawaiʻi Volcanoes National Park is the most…

Due to a new volcano eruption starting on May 3,…

At an elevation of nearly 3000 feet, Hawaiʻi Islandʻs Waimea…

Nestled among the dramatic black lava fields of South Kohala,…

Holualoa: Small Town Charm in the Heart of Coffee...

Nestled among the cool slopes of Hualalai Volcano, just south…

First time visitors to the Big Island often notice that…